14 Jan Holidays Made Brighter with the Community’s Help

Posted at 06:08h in spotlight by The Sophia Way

Every year, the holidays are a joyful and rewarding time at The Sophia Way. The Holiday Gifting Initiative brings together the community with just one goal – to make the holidays a happy one for women we serve. 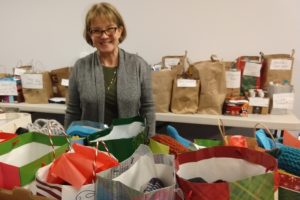 “It’s very rewarding to put together the gifts bags,” says Alison Dildine, a long-time volunteer and our holiday lead this year. “It is a way for me to give back. It’s important for the ladies to have as happy holidays as they can, to have something in their hands that’s new.”

Alison has been involved in the initiative for the last eight years and she confesses that the initiative is time consuming, but very rewarding. Planning starts in early November and from on, its communication, lots of  spreadsheets, and getting together the different pieces until the middle of December, after which it is of sorting, packing, and finally delivering the gift bags.

This year the number of donors doubled. Alison attributes it to the fact more people and groups now know about The Sophia Way and are keen to be involved in supporting women who need shelter and housing. “In fact,” she says, “nearly 25 individuals and groups reached out even before we sent emails.” The community is stepping up as local businesses have adopted The Sophia Way as part of their giving trees and holiday gifts. Google, for instance, donated an enormous amount of gifts, including clothing that we ordinarily don’t get.

Then there are the wonderful volunteers without whom we could not do this initiative. More than 20 volunteers helped in sorting and packing. “Cindy and Debbie, in particular, were wonderful,”says Alison. “They came every day in the last week and did what had to be done until it was done. And a group from Salesforce helped in counting items and sorting them into gift bags,”

When packing the gifts bags, Alison is thoughtful about what would be most helpful for the women. For instance, for women in the Emergency Shelter, she puts small and light things as they are on the street through the day. All the women receive a scarf, hat, and gloves for the winter.

Alison shares a touching story –
“A retirement home has been supporting The Sophia Way for many years and a woman there would knit hats as gifts. Tragically, she passed away two weeks before Christmas. Her family knew she had been knitting hats for The Sophia Way and they brought in the ten hats she had knitted. It was very meaningful for us – she was so enthusiastic about making the hats for the women – and even more touching was that the family donated the hats after her passing. It was very heartwarming.”

As they’ve done for the last four years, the “Elves” from Sophie’s Madeline Church – Mike, Jon, John, Mike, and Ken – delivered the gifts to the women. “They love doing this every year,” says Alison.

And the reward for all the work is hearing from the women we serve. One woman wrote an email to say: Thank you so much, I feel so love and cared for seeing the wonderful things that were in the bag.

It is truly wonderful to know how much our community cares to make the holidays special for the women.

View list of donors and volunteers, and photo gallery