Posted at 13:48h in spotlight, stories by The Sophia Way

A wife, mother and, veteran…homeless after 67 years.

Amara had not planned to be homeless. No one does. However, it is a narrative that is playing across the United States – people struggling with homelessness in their twilight years, at a time when they should be settled, finding peace and comfort.

Amara’s life turned upside down when her husband unexpectedly passed. She was alone for the first time in her life and knew no one in the city that she had been living. She moved to Seattle to be with her only child, but, just before Christmas had issues with her daughter’s boyfriend and had to leave. 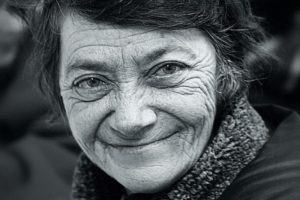 Without a home, Amara found shelter at The Sophia Way’s emergency shelter. Struggling with health issues and in severe chronic pain, Amara found it challenging to sleep on the mat on the floor. Her case manager, Jamie, applied for a place at Sophia’s Place Extended-Stay Shelter where she would have a cubicle with a proper bed. “It gave her a comfortable sleeping arrangement and more time to rest. But, it was still hard for her during the day as she would have to leave the shelter for the three hours that it was closed,” says Jamie.

It was also at this time that life dealt Amara another cruel blow – she was diagnosed with bladder cancer. Amara did not give up, and diligently went for treatment. “She struggled,” Jamie shared, “because she was in chronic pain and cancer exacerbated it. She was also concerned about the pandemic because she had pre-existing conditions.” However, Amara was resilient and fiercely independent – she would take the bus to visit the doctor. She was also thoughtful and sprayed bleach every time she used the toilet to ensure others at the shelter were not infected.

Her case manager supported her at every step. Understanding that as part of her treatment, Amara needed to have her own bathroom, case managers moved her to Holly House, our transitional living property, where she would have a private room and bath. “She was so grateful, she cried,” Jamie said. Staying at Holly House gave Amara a place to call home while going through her treatment. It allowed her to have privacy and recuperate after her weekly treatment.

Through all this, Amara was also working on getting her VASH voucher to rent an apartment. Jamie was right by her side, helping with paperwork and driving her, at times, to appointments and orientation. Jamie would visit Holly House for their weekly meetings so that Amara did not have to take the bus to the office. “These small things helped her as she was able to rest more,” she shared. At Holly House, Amara made friends with the other residents and helped with chores. She would tell Jamie how happy she was to live in a home that had a kitchen so she could cook.

When Amara received her VASH voucher, she and her case manager searched for VASH-compliant apartments. In the middle of the search, Amara received news that her daughter was injured in a car  accident and needed her help. She immediately left Holly House to care for her daughter.

A few weeks later Jamie called Amara about some mail that she was still receiving at Sophia’s Place, and  Amara excitedly told her that she had found an apartment and would be moving in soon. Even better was the news that she was cancer-free. “That was the best news I heard, and I was so happy for her,” exclaims Jamie. “She expressed her gratitude for everyone at The Sophia Way for helping her, and said, ‘’f you had not found me a place at Holly House, I don’t know where I’d be now.'”

Jamie has this to say about Amara: “Amara is sweet and humble, and we were able to quickly build strong rapport and trust. Even though she struggled with her health, Amara worked hard to get into housing. She never gave up. I would encourage her by saying: ‘Despite all the struggles that you are  going through, look at what you’ve accomplished.’ It was wonderful that she was able to get housing because being homeless, especially with health issues, can be debilitating. She went through traumatic times and has come out stronger.”

Amara’s story has a happy ending because of the support of generous donors like you who made it possible to get the help and care she needed.

There are many more women, like Amara, who struggle every day with living without a home. You can give them the resources they need to turn their lives around. Make your gift today!